Lady Justice Nicola Davies with a picture of her in her robes, drawn by court staff

Lady Justice Nicola Davies’ career in the law has been one of firsts.

From becoming the first Welsh woman to become a QC, to the first female Presiding Judge of the Circuit in Wales and first Welsh female Appeal Court judge, she has led the field in many areas.

Now she has helped launch the Inns of Court Alliance for Women, another first which brings together the four Inns to support their female legal professionals.

Lady Justice Nicola Davies returned to Gray’s Inn, where she was first called to the Bar, for the Alliance’s launch event.

She said: “It’s a first for women.  An alliance between the four Inns of Court to support women and to provide information and encouragement directed to the development of their careers as barristers.

“The Alliance launch went well. We have since been contacted by individuals and organisations offering their support. 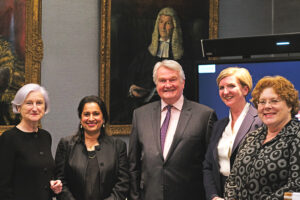 Lady Justice Nicola Davies with the Lord Chief Justice Lord Burnett of Maldon, and co-convenors of the Alliance

“The Lord Chief Justice was present at the launch; he has been very supportive. While the Alliance is directed at women, we welcome men as allies.”

The Alliance has a follow-on event, Foundations for a Fairer Future, on Wednesday 9 March from 6pm. It is in-person at Middle Temple Hall, and online via Zoom, and free to attend. Please book your ticket in advance on Eventbrite (external link, opens in a new tab).

Lady Justice Nicola Davies hails from Llanelli in South Wales. She attended Bridgend Girls Grammar School and Birmingham University; and worked as a investment analyst before becoming a barrister.

She said: “My background was not typical of the Bar at the time. It made me apprehensive about becoming a barrister. The Bar appeared to me to comprise men from a public school and Oxbridge background and I thought I wouldn’t stand a chance given my background.

“There have been challenging moments in my career. I never had a female role model. I cannot say if I’m seen as a role model for other women – only they could tell you if I am.

“Throughout my career I have spoken to women to encourage them to apply for Silk or for part-time/full-time judicial appointment. In my years in practice, no woman was speaking to me in those terms. 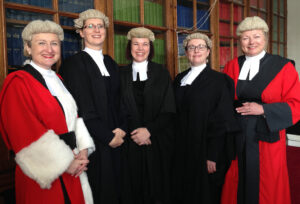 In her speech at the Alliance launch, she highlighted some of the issues facing women in the legal profession:

“The retention of women at the Bar has been and remains a problem. The figures for women at the Bar at 15-plus years call demonstrate a significant drop.  The reasons for this include difficulties returning from maternity leave, balancing life at the Bar with caring responsibilities and the fact that many women are more likely to specialise in lower-paid, often publicly-funded, areas of the law.

“A year from now, the Alliance will have held further events.  We will be identifying issues of particular concern, how they impact on women and looking at how we can address such issues. This is a long-term commitment for me.”

And while she welcomed news articles (opens in a new tab) about her chairing the first all-female Court of Appeal (Criminal Division) session in Wales in July 2021, sitting alongside Mrs Justice Jefford and Mrs Justice Steyn, she said that all-female line-ups should be considered the norm in the future.