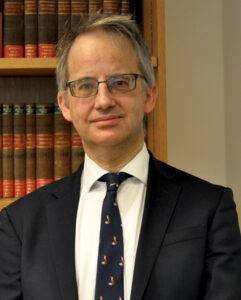 David Foxton became one of the Judges of the Commercial Court in 2020.

He is authorised to sit in cases in the Financial List and the Competition Appeal Tribunal. He also sits in the Administrative Court and other Queen’s Bench work, including crime.

Mr Justice Foxton studied law at Oxford University and King’s College, London. He was called to the Bar by Gray’s Inn in 1989.

He practised as a barrister at Essex Court Chambers from 1989 to 2020, acting in a broad range of commercial disputes, and also accepted appointments as an arbitrator.

Mr Justice Foxton is one of the editors of Scrutton on Charterparties and Bills of Lading.